Hello guys,
You can watch a little vid right here: 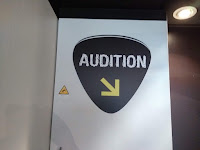 It's been a while that I booked a trip to Paris. Me and Mario wanted to play in the streets but then I discovered this was forbidden! Really, I used to play there many times, even in the metro!
Now it's forbidden and I don't want to take the risk the police will take our instruments, so we won't play in the street. But then I heard that there is  a possibility to play in the metro of Paris. But you must do an audition for it. So I send an email, not expecting an answer. After two months I got this letter with an invitation for an audition. So Mario and I decided to go.
We took a train at night and first we went to the Highlander to play at an open mic. But we were way too late, the list was full untill almost 4 AM next day!!  We had some drinks and went to the hotel. 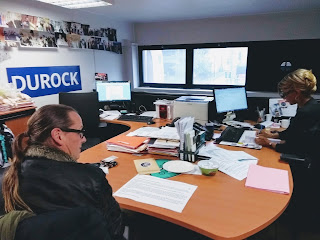 Next day we got up early and walked a long way with our guitars and suitcases, looking for the office of the RATP. (French metro). When we found it, we were way too early.
We were there already at 1 PM. Our turn was at 4.00 PM. We hang out a bit, but got tired and nervous while waiting in a small room with other musicians.We could listen to the other auditions which were downstairs.  The level was quite high that afternoon. I got this headache when it was finally our turn. I speak French just a little bit, so I had a hard time :) to answer their questions. I was prepared to tell why I would like to play in the metro, a good friend translated my motivation from Dutch into French, so I just read my story to the jury. We had to play in a real small room for at least 15 people. 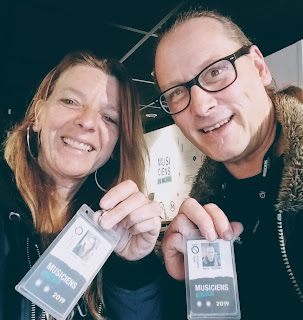 We wanted to play two of our own songs, but after the first song they asked us to play a cover.
We played Suzanne (Leonard Cohen), because I always play this song when I am busking in France, so we could do that one.
When we were finished they said'Mercy'  and told us that they will send a message in ten days to let us know if we got this badge.
When we left we felt really depressed, we didn't think we did a good audition because we were too stressed and tired that day. Still, we were glad we did it, because we both felt we had to do this. It felt somehow important to both of us.

After 10 days I got this letter that we could get our badges and I was really, really happy!
So we got to Paris again and after we got our badges we played in the metro (Nation).
It was exactly what I expected, so it was okay for me.
Playing in the metro is not easy, I remember this from my travels. People come and go and are mostly in a hurry or thinking about their business, their jobs, travelling from one to another place. But there are also people who like what you are doing and they smile or give some money or give thumb ups. It's important to find a good spot to play, it must be a spot where I feel comfortable.
When we got home that day, we were excited, drunk, tired and happy.
Now we are members of the association 'musiciens du metro'.

Wednesday May 1st we will go back to Paris. We will play in the metro and hang around. Hope to meet you there! I will let you know as soon as possible where you can find us!
I made a special page about this subject in French. Click here:Musiciens du Mëtro EN FRANCAIS

Mario and I will play our own songs but in the last weekend of May I will be back and play Joan Baez, Leonard Cohen and Sandy Denny covers. And ofcourse my own songs :)
I made a setlist on youtube, you can watch it here: Annette on Youtube - 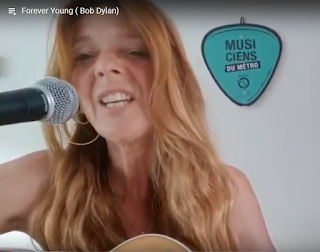