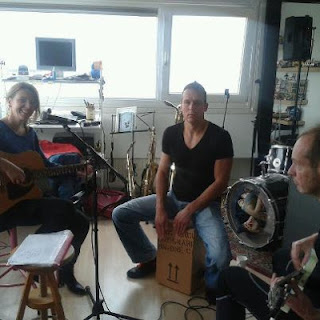 I met this cajunplayer from Utrecht and we already got some rehearsels together. Actually, I didn't expect that this instrument sounds so nice with my music, especially when it's played by this nice guy who seems to know a lot about borderlinemusic :)
As I told you before I tried to play together with some guitarplayers, I've had three now, but for several reasons ( distance, jobs)  it just didn't work out well. When I listened to the recordings I've been thinking about it a lot and finally I decided not to look for a guitarist anymore. So now Arjen has showed up and I look forward to do some gigs with him, hopefully this will work out.

Another thing I'd like to tell you is that I got a call from the Noorderparkkamer and they would like to talk with me about SWANactivities. They asked me if I would programm musicians to play on a Sunday afternoon every two months. I have to think about it and talk about it with some other people, so if you want to know what's going on, just keep in touch with my other blog www.songwritersamsterdamnoord.blogspot.nl
or the SWANfacebookpage:
https://www.facebook.com/#!/groups/317746511601426/ 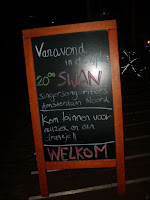 There's a wooden house in the dark of the Noorderpark in Amsterdam-Noord. And it's called The Noorderparkkamer.

It's always a pleasure to organize these nights. I meet a lot of musicians and I really like to listen and to watch them playing their songs.
Now I have to be honest about last night.  It was nice and cosey inside, and after a bit stress because of missing some mic cables, we were waiting for the thousend Facebookfriends who were invited by the Noorderparkkamer ( which was me actually, 'cause I made the event in their account).
Now I am not that stupid to think many people will come over ( I did this before, so I know what's going on and I am very happy if maybe 10 people of the thousend will show up ), but  well,  I must admit, I was a bit dissapointed about the fact that there was just one person who really took her bike last night to come over. She arrived pretty early, I think it was only 19.45 and she drank some coffee and waited patiencely for what was going to happen...
When the lady left at the end of the show, she told me she really enjoyed the night,and that made me very happy !  She especially liked The Monotrol Kid from Belgium.

Now I've got to say, I saw him playing before, that was at Skek, and then I was not very impressed. But last night I had to change my mind about him, he really did a good job !
I forgive him not remembering me, even though we had dinner together that night at café Skek. Later on he told me that he didn't remember me because at that time I looked totally different and than I played together with another bass player. I looked and acted like a strange hippy that time, and he was right, I do have some different personallitys, so I understand he didn't recognize me last night. Anyway, he's a very good singersongwriter, he sings very well ánd he is a nice entertainer. Me, as a Dutch woman,  like people from Belgium, their language is very similar to Dutch, the language sounds like Dutch in the Golden Century, or something like that :)

This night I brought Mick with me on the bassguitar, and our friend Frank Fanille came along with us. Ofcourse Marjolijn of the NPK was there to help and the unforgettable Bruno Edsme, who, despite his flew, made everybody happy with the sound of the music. This time I didn't forget to make a picture of Ellen, the charming woman behind the bar. 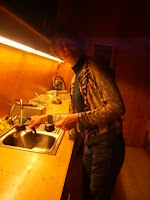 Last night I also met Glenn Hayes and Carlos. The first one is a soundmixer and he asked me a few weeks ago if he could mix my song Schizophrenia. I did not exactly understand what he ment by that but when we stood outside in the park Carlos translated for me, so now I probably let Glenn mix the song. Actually I am curious what he's gonna do with it. 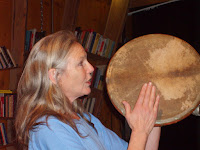 Here we have Froukje Dijkshoorn, a lady who is living in Amsterdam -Noord. I liked very much what she was doing: just singing from her heart and playing a trom.
Me myself I played three of my songs with Mick and it was allright for now. 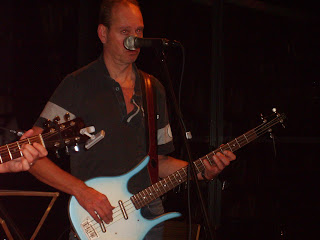 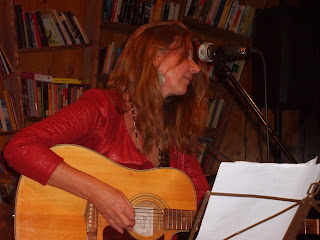