singing for the Homeless 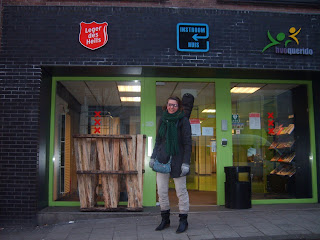 I just came back from this special gig. Somehow I got to this special place where homeless people can eat and live for about three months. I knew what I could expect but it's been a long time I sang for the homeless.
This afternoon I decided to sing some songs I used to sing in the streets (which was not a very good idea, but  I didn't know that yet).
As you can read in this blog my musical career started as a street musician and when I was just 18 I travelled through Europe and earned my money by singing in the streets. That's where I met a lot of people and  I also know very well how it feels when you are alone and feeling lonesome and just surviving your f* life. When you are always looking for a place to stay and counting money. You can read about my homeless life in my autobiography  -just send me an email and I'll give you a link where you can order the book.  ( As an author, I do not use my real name.) Anyway, I know a lot about beggars, drunks and streetpeople, and I can tell you this: there are 'bad' people and there are 'good' people. Just the same as everywhere,  in all layers of the population. Some of them were my friends and some of them were definitely not. But however, I've had fun with some really tough beggars in France and yes, I stood next to them when they begged in front of churches and yes, I begged by singing and me and the beggars did a good job together in these early eighties of the last century. 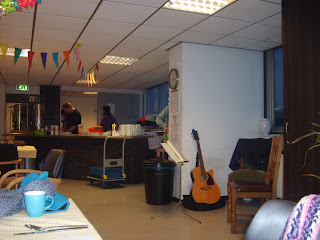 Anyway, I made a setlist and there were songs of Leonard Cohen and Simon & Garfunkel on it ( and Sandy Denny ofcourse). I had to play acoustic which is always really hard to do because I don't have a strong voice. I took my 13 years old daughter and her 12 years old friend with me and told them what was going to happen. Once a month some volunteers are cooking and everybody in the neighbourhood is invited to come over and eat a good meal. When we arrived after cycling 45 minutes in a cold wind,  people were very busy by preparing food and they offered some coffee and tea. I waited untill more people came in and then I decided to start, while the girls were at the toilet to do their make-up. I played some own songs and I sang Suzanne (Leonard Cohen). But I sang that song to low and it didn't feel good at all.I did some more covers, and remembered how I used to play them in the street. But this was 20 years ago and times  change ...I tried to tune in with the people, but I was a bit worried about the girls, so I could not really relax.  I could see they didn't feel comfortable at all and so first I felt sorry I took them with me. But when I sat down with them and we started to eat then everything changed. The guys at our table were really nice and funny and the girls were very fascinated by this guy who tried to hide some food so that he could eat it at night. Actually I think he was making jokes, but the girls were very impressed. 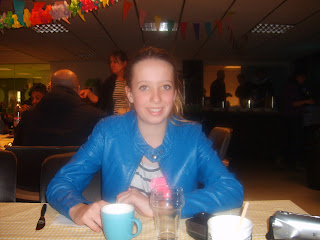 The guys started talking with us and one of them asked me if I would like to come back and sing at another place for homeless people. The girls were having fun  and happy and so from then I had a good time and I sang some more of my own songs. I thought the people liked my songs better then the covers, although one of them came to me and asked me if I sang songs of Joan Baez. (No, I don't but I can sing like her if I want to, which I don't want to, ofcourse). At 8 pm we got some icecream (delightful !  Actually, the whole meal tasted really good, it was Thais) and it was time to go home. One of the guys shaked hands with Luka and spoke to her: "You must do your best at school ! " and again she was very impressed and told me later that she had to think all the time about her fights with her parents about having a smartphone, tablet or whatever, and that now she realized how rich she was. Also my daughter told me she was glad I took her with me to meet these people, so they were pretty excited about this experience.
And me, I was excited because I was trying out my new glasses. They are fake ! 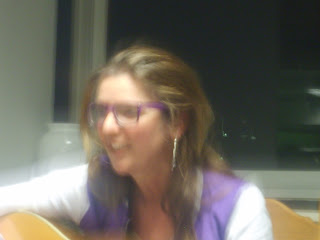 I would like to show more pictures of this gig, but I don't think people appreciate. 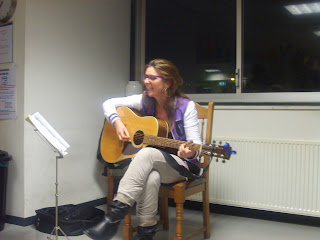 So, if you want to know more about this place where I played this night, clilck on this link: instroomhuis
If you like what I am doing please click on the thumb up LIKE button on annette on facebook
Gepost door annette vogel op 14:19 Geen opmerkingen: Links naar deze post 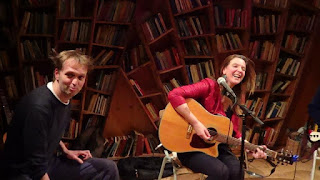 I just got this picture from Facebook and I am so happy with it !
It's a picture of last night, I played together with my friend and father of our two wonderful daughters.  It's been at least 10 years we did a gig together. We only played three songs last night but I loved playing with him again. And I loved watching my daughters who were excited to see us playing together.
On a Raft

If you like to read more about this night you can read my report here (in Dutch):