One more week and then school will start again. This year is gonna be a busy year because as you know i am a schoolteacher, i love my work, but i also love to make music, so i am gonna be a hard working girl.
this month we had a lot of unexpected gigs. First of all my busking project. I already miss it. In Amsterdam it's very difficult to make music in the streets. You can't play in the centre, you can on Damsquare, though, but it's hard to find a good spot for me. I need a small street with a good acoustic because i don't use a gear or cube or something...
But there are some nice gigs planned in september, and i just came home from some nice musically adventures.
Like camping Bakkum! Most famous camping of Holland. Like a little town, full of people from Amsterdam and surroundings... The campside has this really good restaurant and that's where we played. Thanks to Tony Daudey, he really rocks! 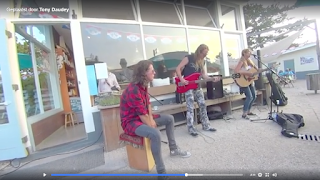 I made a printscreen of a short film of our performance. With Tony on cajon and Mario on bass.

Then we went to Castricum again, this time to play at café De Bakkerij. We took Tom with us on cajon. We had a very good sound upthere, thanks to Joeri, a young guy who programms the café. I really enjoyed it, because it was our first performance with Tom. He did a great job. My songs may sound easy, but actually they are a little bit complicated :)


Today we played at this café called Checkpoint Charlie. Nice café, nice people. Not many people showed up because of the weather and we already expected this. However some good friends came to listen and we did a good job. Second performance with Tom, who plays already 20 originals with us. Isn't that great :)) 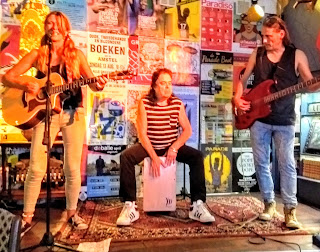 Travelling around and busking! Streetmusic and beggars... 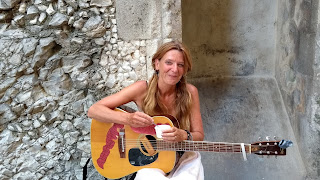 This is a really special edition of my life.
It's been half a century ;) that i have been travelling, hitch hiking, living from music... I was really young then...
But this summer I did it again! I was really really surprised that many people liked what i was doing.
It took me a few months to think about this adventure, I was not sure I could do this after so many years.
It just happened to me because I bought a trainticket to Avignon from Amsterdam for only 50 euros but for this ticket  i had to travel on Saturday. I had to be on Wednesday in Spain, though,  to pick up my daughters, so I was too early. Then I decided to take my guitar and play in the streets from that Saturday untill Wednesday. Some of my friends stimulated me to do this, I was a bit nervous but it worked out great.
I decided to focus on the music and just sit down in  small streets and sing.
I was surprised many people liked what i was doing. From young people to old people. From rich to poor.
Yes, after only one day I knew almost every beggar and artist in the centre of Avignon. And they knew me.
And yes, I know the life of beggars is though, I have been there, you kow.
Still, the atmosphere was really great and beggars and the addicted where really really nice to me. They gave me coins or thumb ups, and yes, I had to do this. I HAVE to do this. I don't know why, but it's my life. I sang in the streets when i was young and i travelled like a gipsy and i survived this really though life, it's all about surviving.
But now i am older and i have children and i have a home and a job. So its different. Still, i feel everyday i can loose everything i love and i can loose every security of my life.
I just need a guitar. And sing.
The French like my voice, thank god, and the Spanish had to get used to it for half an hour and then they started to appreciate...
I sing old songs, I sing with a really high voice, it sounds a bit like Joan Baez. I sing folk, simon and Garfunkel, Sandy Denny, that kind of stuff. I can live from the money people give me. 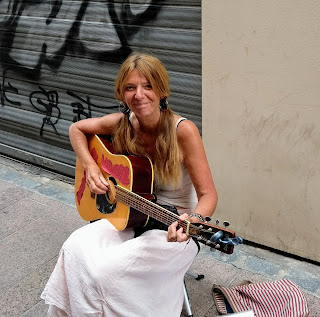 More important is that i could teach my daughters how life works in the street. They saw how their mother sang in the street and how people reacted. How really poor people contact me.... How really poor people can be nice untill 3 pm. After that it's gonna be different, because many beggars start to get drunk or something... But still... it depends on the person. There are nice people, there are stupid people. Most of the time not dangerous. Be clear, be honest.
Yes, I learned a lot, this summer and I am excited about it.

Summertime at Schiermonnikoog (little island at the north of Holland)

Hi folks,
I just came back from the isle of Schiermonnikoog!
A lot has happened up there!
I organized for the 4th time this little nice festival, called SchierSong Fest. This event takes a lot of positive energy, since I only play non commercial and with musicians who love music more then money. All information about this festival you can find here: SchierSong Festival

After a year of hard work, my vacation started two weeks ago at the radio / tv show of Omroep Friesland. Mario came with me.
I really wanted to play my Duth song "Wietse with you, I'm cycling" just because it's a good song and because it's about my first love on the island of Schiermonnikoog.
It's a new song, so I was really nervous. But it went well. After that we played also some other songs.
The recording can be viewed and listened here: WIETSE WIETSE! @Omroep Friesland

After that, I traveled to Schiermonnikoog, where I had to work on all preparations to programm the 9 songwriters at different places.
That worked out well!I found enough places who wanted to work with me!

Highlight of the festival is Saturday evening and Sunday evening: then we all play three of our own songs at the campsite (Seedune) and on the beach (Pavilion Paal 3). At the campside it'w also an open mic and we had some good musicians there that night! Paal 3 was also really crowded and we had this great jam at the end of the night.
It is so nice that many islanders cooperated wtih me to succes this festival! Especially thanks to Rolald (Berkenplas) Jeppe (Paal 3) and Ronald (camping Seedune) ,  And  the musicians were very good in shape! Without their voluntary contribution this festival couldn't take place. We all had a great time this summer. So next year we will be back for the 5th time! 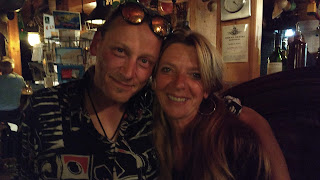 When the weekend was over, I was invited to play on the terrace of a hotel where I used to stay when I was ZERO  years ... :))) That's because my mother was born on the island and she took me every summer to Schiermonnikoog.

Yes!
One week and then... summertime!
Heading for Schiermonnikoog, SchierSongFEstival! But first:
Castricum, in the centre of the town I will play with Mario a set round 6 PM. on Saturday July 15th.
And next gig will be at Café Genieten in Amsterdam-Oost at a nice restaurant. I will play there solo and sing some covers I didn't play for years.... some Sandy Denny songs and some Simon & Garfunkel songs... and ofcourse some own songs. I will play at this restaurant next Tuesday, July 18th.
On Friday Juli 21 I will take the train to Leeuwarden, north of Holland, to do this radio/ TV show and then... me and Mario will take the boat to Schiermonnikoog for the SchierSong Festival. Yes! 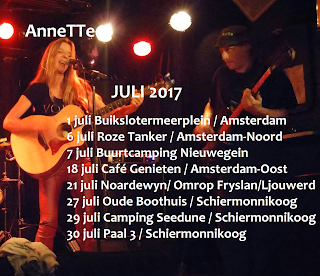 Last weeks I had some really nice gigs, like the Festival at Nieuwegein, really enjoyed that one :) Good weather, nice people, good sound...