I like festivals and I will play on several.
Last week I played at a secret festival, it's called Schellingwoude FEstival and you will find no information about it on the internet.

It is a beautiful festival on the banks of the IJ in Amsterdam North. The weather was beautiful on this Midsummer. I had the honor  to open the festival. I played some old songs there together with Frankie on bass.
Tonight I played at  another festival; ThissFest. This is a festival that takes place in different cities in Holland and is organized by the Dutch Nonprofit Foundation whose mssion is to promote the work of independent singersongwriters. The second edition of ThissFst will be held from the 23rd to the 29th of June 2014 in Amsterdam, The Haque, Leiden, Roterdam, Utrecht, Haarlem. 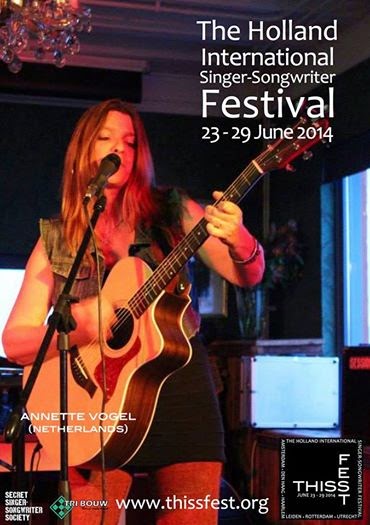 Tonight I played in Utrecht  with Daniel Tempelman. I met Daniel on a SWAN evening in Amsterdam and he has a strong Leonard Cohen sound. I really like Leonard Cohen and tonight we have put together three of his songs played. First I opened with two original songs.
Richard Morris, the mastermind behind the Fest This was also in the cafe. Of course he had to go on stage!

And in two weeks I will play at SchierSongFestival! Hope to meet you there!