Jippie !! I met this guy who likes to play my songs with his bass. He's got lots of musical experience with several blues en rockbands and I really like his sound. His name is Mick and we tried out this afternoon. I played and I played and he followed and didn't say a word.  After an hour or so I stopped 'cause I was really tired. And then he smiled and said: "Yes, I like to play with you". So that was my happy day today.
Gepost door annette vogel op 10:05 Geen opmerkingen: Links naar deze post 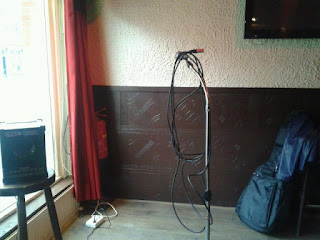 Last Sunday I played in a small café called "Lijn 10", it took me an hour to find it, it's somewhere in the centre of Amsterdam. As usual I came on time and nobody was there, but a nice  barkeeper. He asked me to put some stuff (microfoon etc.) together and I drank a coffee. Then I decided to play some of my songs for the barkeeper and some other people who just arrived.  The sound of that little black box was really surprising me, it was great ! 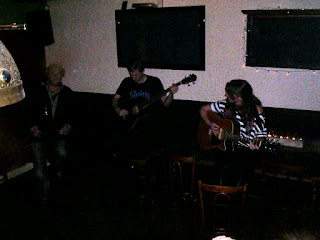 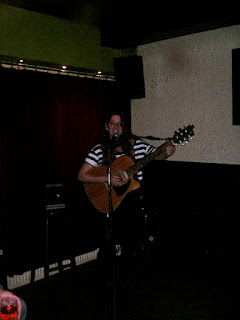 Anyway, I had a great time with the few people who came along and after this party I went with MississippiBleusMan Etienne to another place to play. This is café De Doelen, a really nice café where on Sunday some singersongwriters can play their music.

Tonight I will go to Jet Lounge and Frank shall go with me. Frank asked me to play with him next Sunday in café De Praal, so I will join him then too.  Today I will try songs of Sandy Denny again, it's been a long time I sang her songs, but I feel like singing them again.
Gepost door annette vogel op 01:04 Geen opmerkingen: Links naar deze post

on the road again...

Today I rehearsed with Frank and we sort of decided to go our own ways... I wrote some new songs and they sound a little dissonant and they are a little more complicated. This is not the style Frank likes, so that's why we made this decision. Feel sad about it, but I think it's a right decision. Frank goes on making his own music with his friends and I just go on the road again  to make music in my own way.  Frank stimulated me to play the guitar, he never judged my way of singing and playing, so I really could be myself and do my things.  I realize not many people appriciate my style or the way I sing. It's allright, all I have to say is : this is what I do, this is what I am. Now there's another woman who really stimulates to sing my stuff and this is Dzuana. I played many times in Tricky Theater and Dzuana is very open to every person who wants to show songs of their own. Unfortunately they have to look for another location, because Woody, the owner of the theater, has sold the boat. They have some options for a new location and I hope I will join them in the future.

Now another thing I need to tell is that drummer Dion today has arrived in Thailand.  He will travel around for at least four months. I will really miss him and I appriciated his positive attitude concerned my music and I hope  he will return and that he's gonna play with me again. 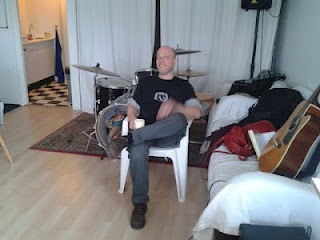 Something else I need to tell is that I played with really great musicians at a place called "The Tanker".
I don't know all their names, but the drummer's called Michael Vatcher. 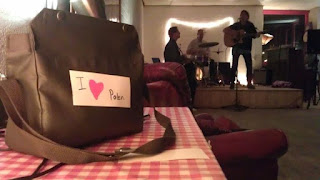 this picture is taken by Carel, she organizes the sessions at The Tanker and she took this picture. Apparently she likes Poland :)) , but at the background you can see me playing the guitar.
Gepost door annette vogel op 09:57 Geen opmerkingen: Links naar deze post

Manuel used to play in my band Scarlet. Today he travelled from Groningen to Amsterdam to play with me again. It was a beautyfull sunny day.
Gepost door annette vogel op 10:04 Geen opmerkingen: Links naar deze post