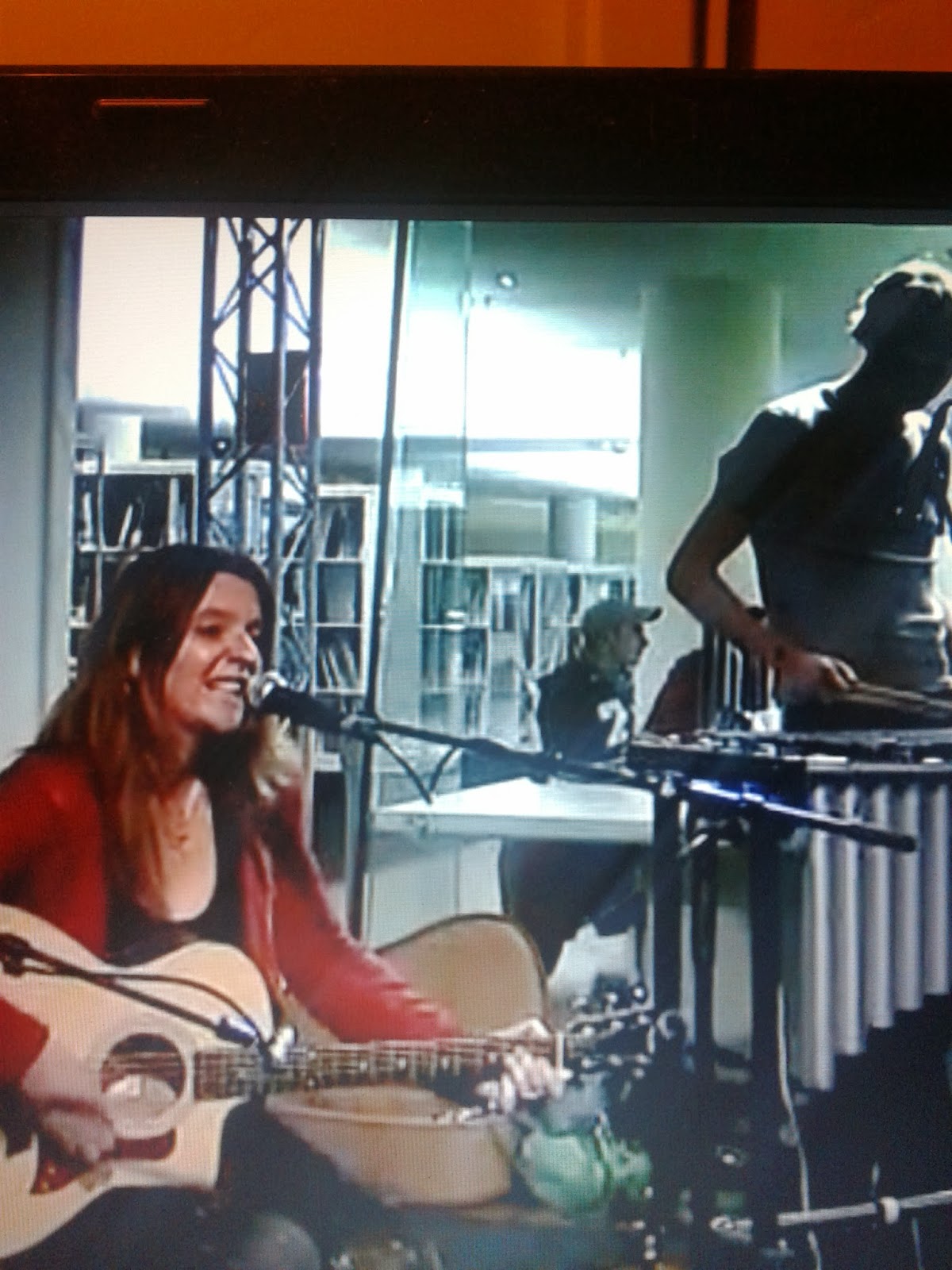 Just at the moment I was going to  explain the kids of my groep 8 about topography of North Africa,  my phone rang. This happens rarely because usually my phone is off in the classroom,  but sometimes it happens and then my private conversations are always very interesting to listen to. So the whole class looked at me and listened expectantly when I answered the phone.  They heard me say: "Ehh, yes, sure, no, you don't disturb me at all, yes, I have time to talk to you..." (no idea to who I was talking) I paused for a moment and then  I was very surprised and asked: ". what... TONIGHT?"  The kids started to giggle because, of course, this had to be a  conversation with a GUY (how do kids always know? :)
When I hung up,  all the children cried  "And teacher, with whom you have a date tonight?"
And yes, I had a date! I was invited to play live on the radio that night!


After school I called my friend Auke and we went together to the central library of Amsterdam. The gig was very interesting. It was a live-recording on radio 5 by the IKON and there were some homeless people in the audience. They got their free coffee and tea and listened  for an hour to an interview and I played two of my songs.( I thought one of them was sleeping, but after the show he came to me and told me he liked the music.) It was a nice interview, by the way. Henriette Smit talked with Reint Jan Renes and he told that people might get 160 years old in the future. So what are we going to do with our lifes if we will get that old? Are we able to live togehter for at least 100 years with the same partner?
Anyway, it was a nice experience, although I had to cycle in a NONSTOP rain to get there.
When Auke and I arrived home late at night we had some good French fries with lots of mayonnaise from teh best chip shop of Amsterdam-Noord. I was really hungry. That's what I really am.

Café De Doelen is a nice pub in the centre of Amsterdam. 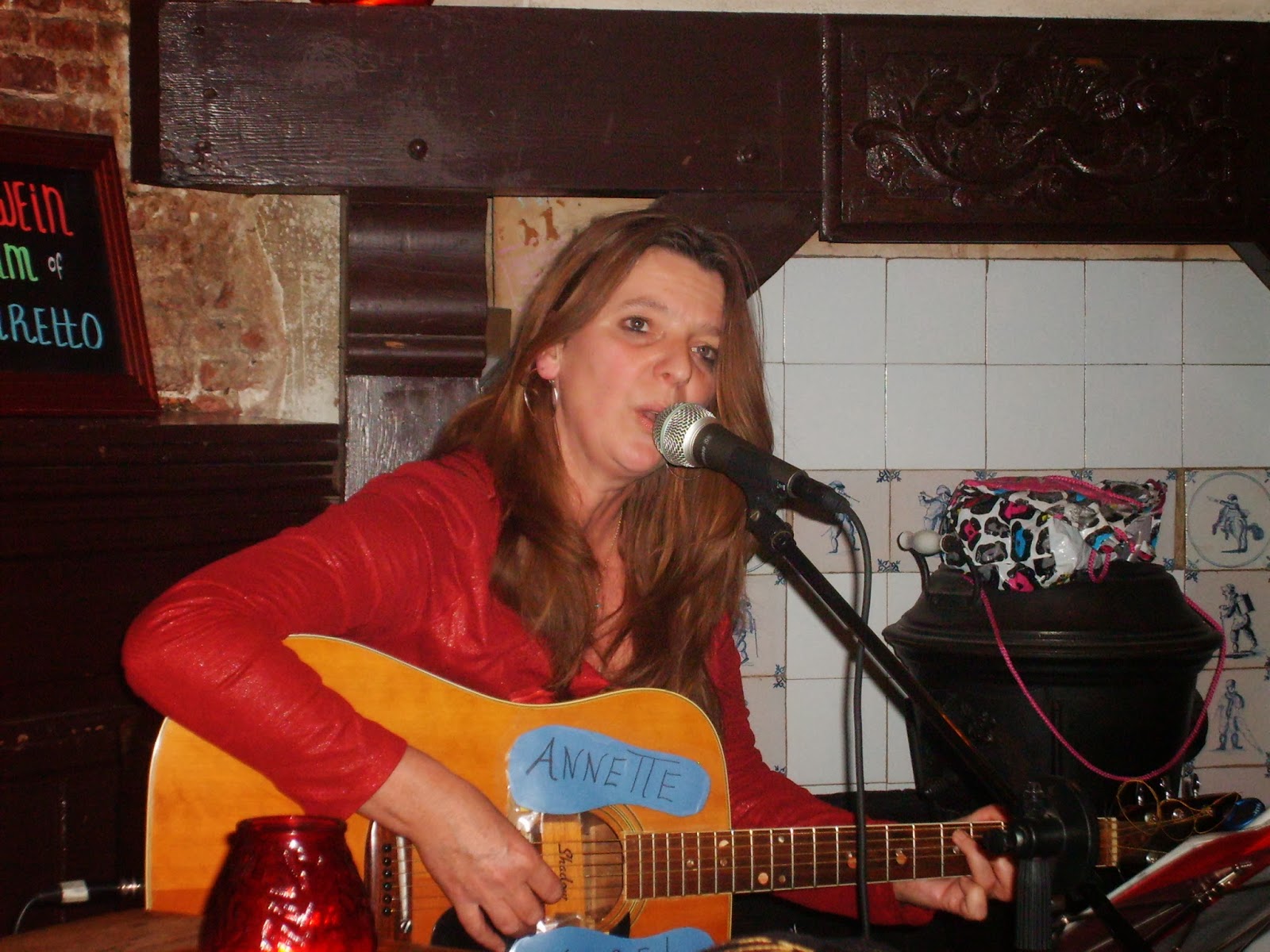 I played there a year ago just after Christmas and I liked  the atmosphere and the bartenders very much. Last night I played there a lot of my own songs but I started with folksongs which I used to sing in the streets.
I thought this cafe was  suitable for British/ American folk music so I sang  covers of Sandy Denny, Simon and Garfunkel and I also played some Leonard Cohen songs. 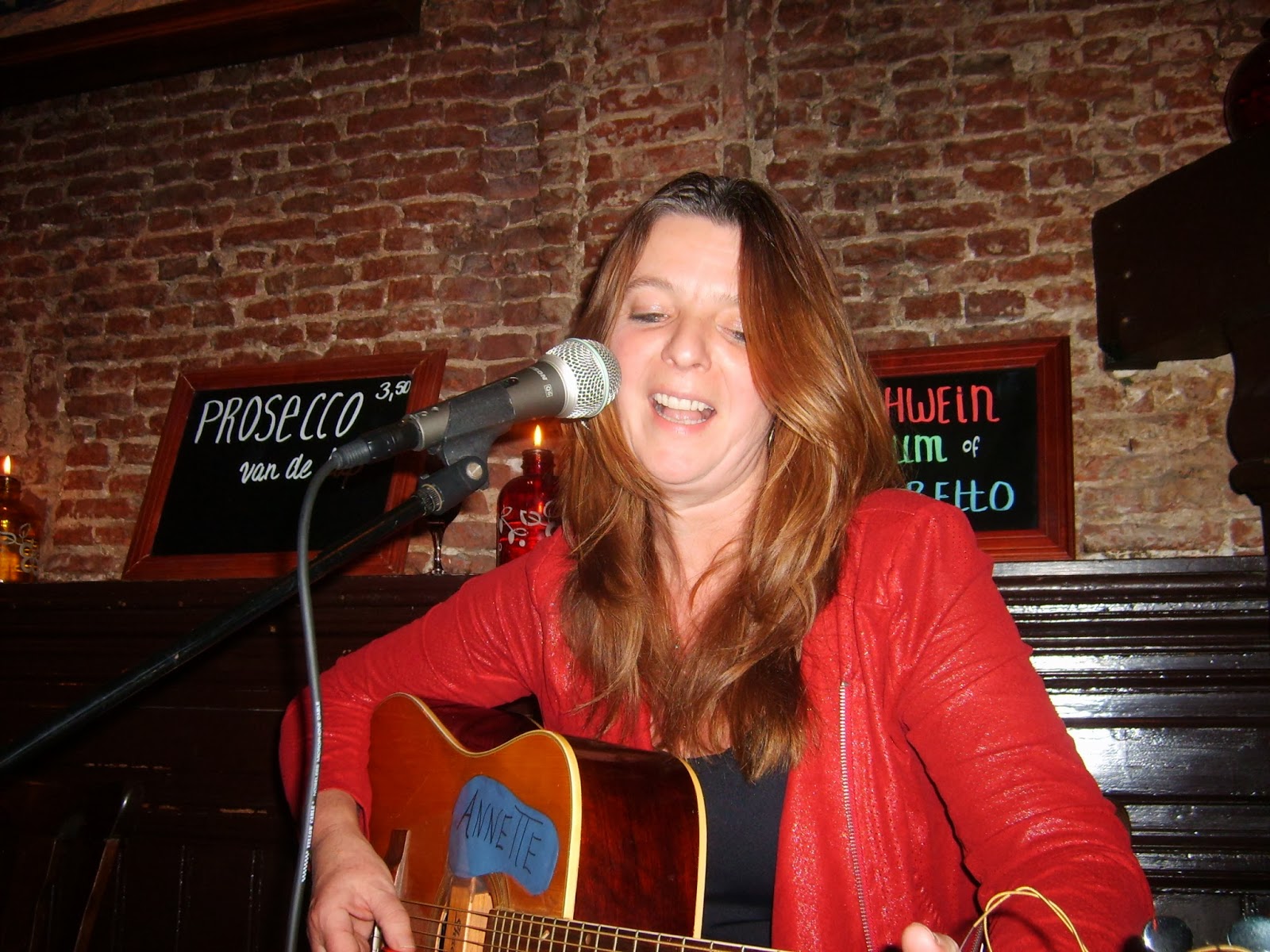 It was the first time I put this kind of music and my own songs together in one set. I played for almost 1,5 hours, I sang 22 songs and  I felt very comfortable. This gig reminded me of the years that I was busking. At these times I played at least two hours without a break. But I must get used to fingerpicking again, because then the folksongs sounds much better.
I was  happy that my friends Jan en Frits came to listen,  they helped me to manage the PA so that I had a really nice sound and I was very relaxed because there was also a very nice audience. 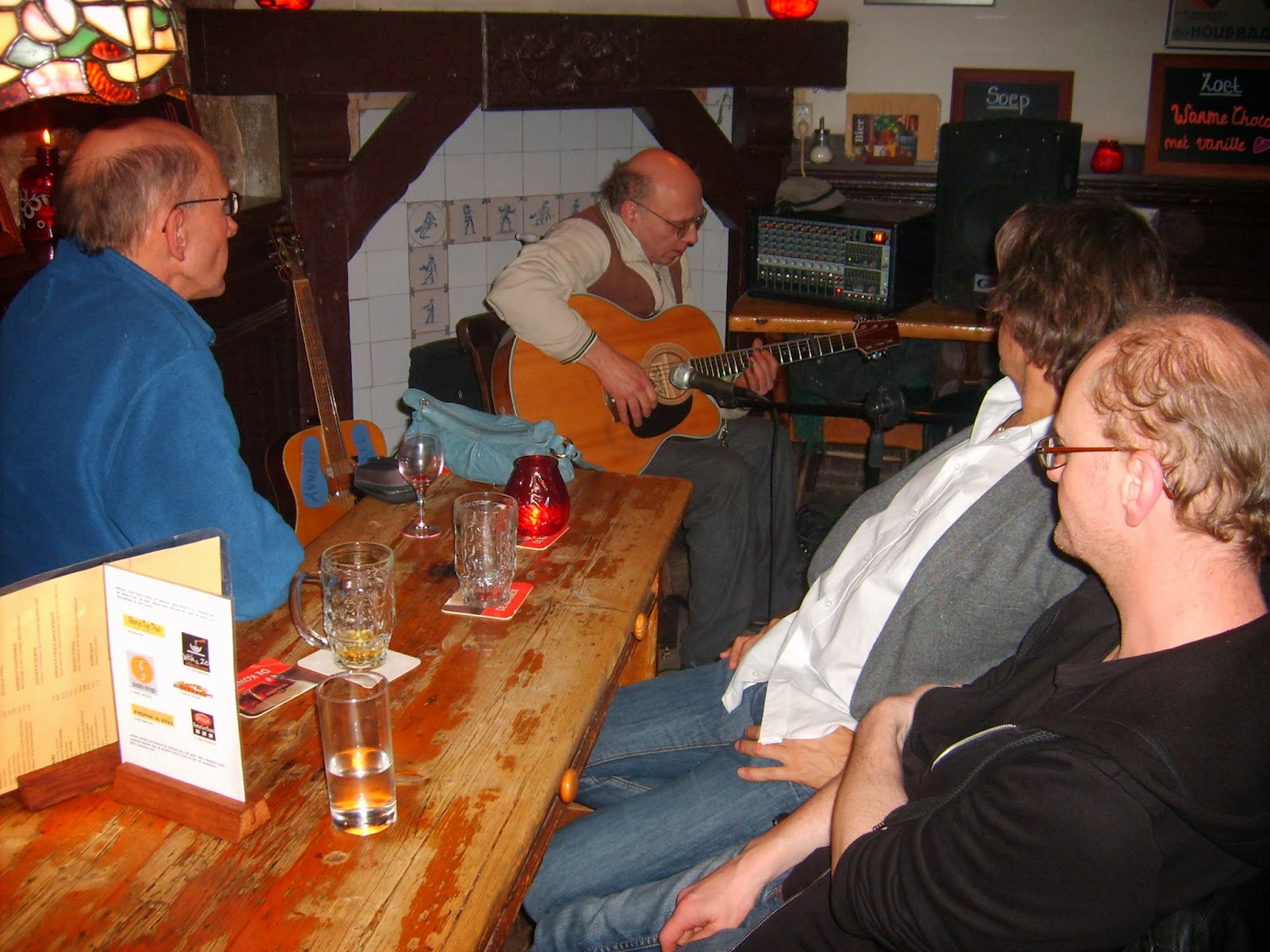 If you as a songwriter like to get a gig in café De Doelen they expect you to play from 8 pm - 9 pm and after that there is an open mic. (Every Sunday)
It was almost 10 pm when Etienne came by and so I sang a few more songs and then he finished the night with his Delta Blues. I plan to come back next year so that I got into a little tradition to play here 'round Christmas and New Years Eve :) 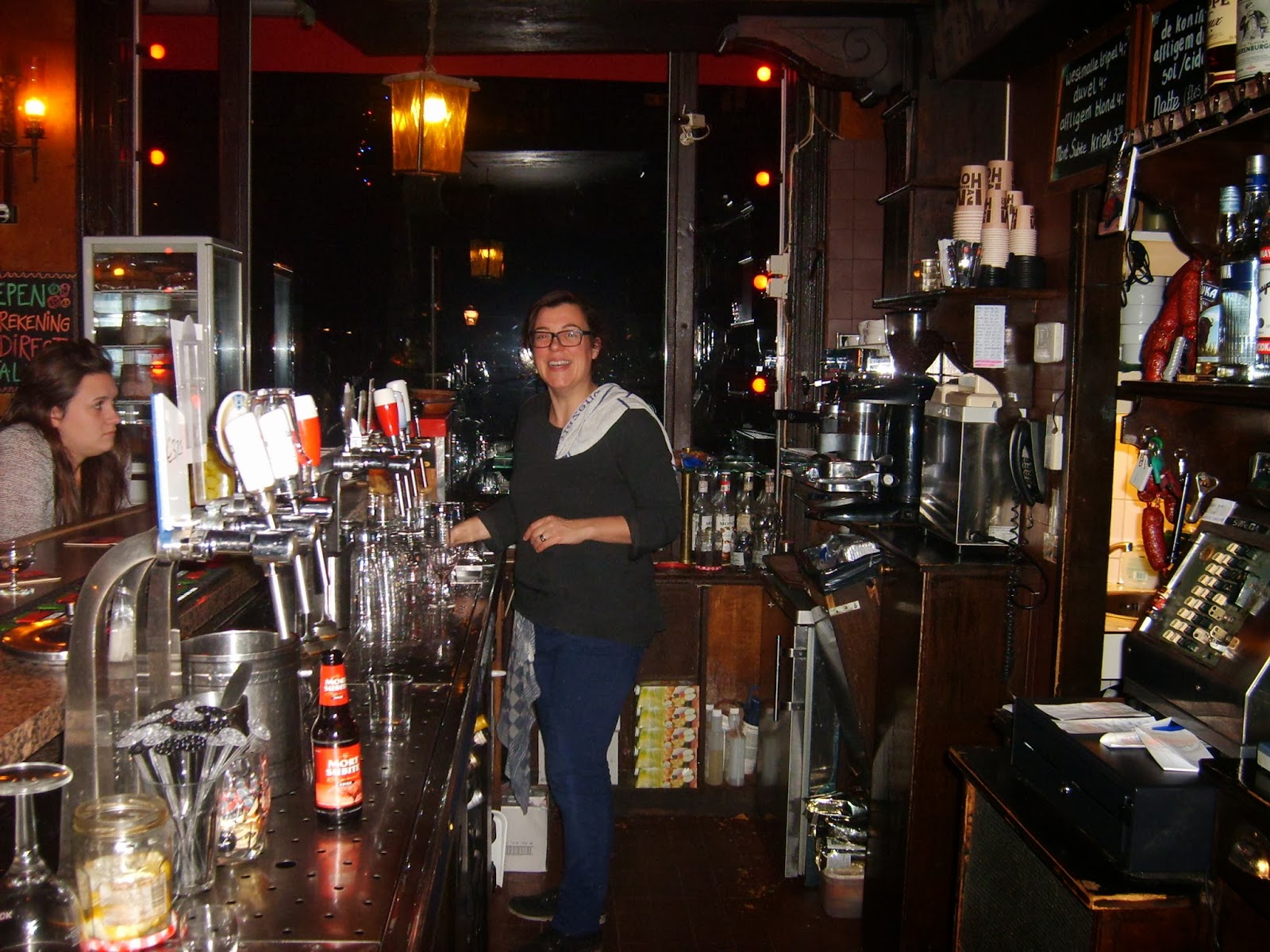 
Last night I was host at the SWANnight (SongWriters AmsterdamNoord) and I played together with Auke on vibes! We played three songs and in the future we will do more gigs together.
Next gig together will be on januari 28th on a local radiostation ( omroep Zuidplas bij Taste of Music) !
By the way, tomorrownight i will play at Café De Doelen, I will play there some songs of Sandy Denny and Simon & Garfunkel, Leonard Cohen,  and of course my own songs at café De Doelen
Gepost door annette vogel op 07:02 Geen opmerkingen: Links naar deze post