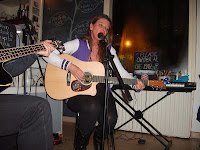 Last night I went to The Hague to enjoy The Secret Singer-Songwriter Society organized by an American singer-songwriter: Richard Morris.
To be honest,  first I did not really understand what was going on there but I just took a train to The Hague and I was happy GedFx was waiting for me at Central Station. I knew GedFx because he has been playing at SWAN at the Noorderparkkamer ( a monthly open mic which is organized by me.)  So he took me to this little restaurant called Quirky

(Quirky, Lunchroom & Gallery )
Christine, the owner of this restaurant welcomed us and showed us where we could leave our coats and guitars. I never had met Richard and I was a little surprised that he was busy with cooking. So I thought he might be the cook of the restaurant.
Then Sharon Gosler and Ell Sol arrived. Sharon I already knew from a gig in café Langereis in Amsterdam and Ell Sol I also knew from his great performance he gave at SWAN. Okay, while Richard was cooking I found out that the other nice young people who were in the room were students of a school and that they were working this night as stagiaires. Richard was cooking for them and the songwriters, but in fact he is the founder of The  Secret Singer-Songwriter Society which is a Dutch non-profit foundation just established this year. Its mission  is to foster the work of singer-songwriters by recording, distributing and promoting their songs to raise money for and awareness of a multitude of humanitarian causes around the world.

I loved to meet Richard, he is a very open-minded and creative person and he made me feel very welcome at this gig. So first we had dinner together and then the fifth singer-songwriter arrived. Her name is Arlette and she lives in The Hague.  Ell Sol and Sharon are from The Hague, too, and GedFx is from Utrecht.


It was a very international company cause the students were from all over the world and Christine is British and Richard is from the USA. After dinner everybody was busy to get things fixed before the guests would came in. Christine told us all tables were reserved and dinner would start at 8.30 pm


When all guest arrived Arlette sang two of her songs. She has a nice folky voice and a very good presentation. Later on she sang more of her songs, but first Richard explained to the people what was happening this night. After that it was my turn. On facebook I had seen that Craig was planning to come over and so I had asked Craig Latta to bring his guitar with him. Later on we played some songs together.


Then it was Ell Sol his turn. He did a good job and I am glad I invited him to play at SWAN in june on a Sunday afternoon in the Noorderparkkamer.

In the mean time Gedfx made me really laugh, he said he was a bit nervous, but he really had nothing to worry about. He is a nice performancer, has really nice songs and a good voice and most important: the audience was GREAT ! While I was drinking my wine and waiting for my second turn I loved to listen to GedFx and Sharon Gosler.
While Arlette was singing her songs I really had to go because I needed to catch a train and bus, I wanted to stay longer because now I had to miss the songs of Richard, who also played later on. 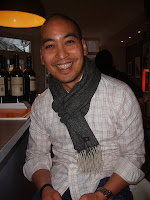 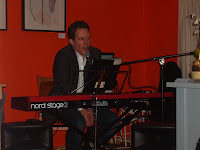 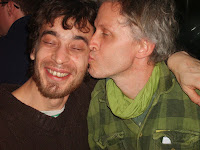 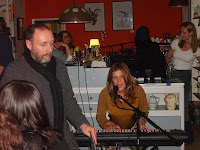 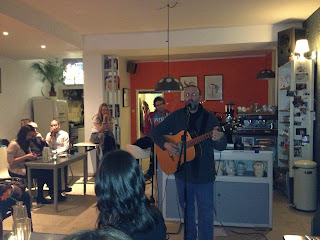 I didn't want to leave, but I was in a hurry so I already left the place at 22.15 and I turned right in stead of left so I got totally lost in the dark and lonely streets of The Haque. There were not many people and then some girl took me on her bike to get me at a busstation. Finally I caught a train but I missed my bus in Amsterdam so I arrived home at 01.15. It was not really a problem to me, I didn't want to miss this nice gig, thanks to Richard, Christine and colleague singersongwriters and the very nice audience !
If you like what I am doing, please click on the thumb up button on my page: Annette-Vogel on Facebook
Gepost door annette vogel op 01:51 Geen opmerkingen: Links naar deze post