Amsterdam - The End of The World - Einde van de Wereld

I have been playing several times on this lovely boat. The boat is called "Einde van de Wereld" and yes , it's somewhere at the end of the world... somewhere on the river (Het IJ)  in our lovely city Amsterdam.
You can eat there really good foot and... good music.

As I said, I have been playing there before, and this time I played  with Mario on bass and we played just one set, because there were also some other lovely songwriters playing that night. We did a good job together although Mario lost his head, hat I mean... it was too hot to wear a hat like that on stage :)))

Rei Satoshi is a great guitarplayer, she organized this guitarnight. She played her songs with Andries Zwart(guitar) and later on she played with  Marloes Klaasen. Marloes  is a lovely songwriter and she plays as a duo with Rei. They call themselves Cattitude.

Jim Marsdon, a very nice guy from Londen, living for many years in Amsterdam, got a great voice, and he played some covers with so much energy! Me and my friend Barbara sang with him (just as audience) and I had a great time. Of course I will tell you always how great and lovely and good my musical times are, but I am really serious about this one.

That is because I love the End of The World. This boat is a good restaurant. The people who work there are mostly volunteers and they are so relaxed, I can recommand everybody to come over.
Find out yourself!! Click here: Einde van de Wereld

Hope to meet you soon, I will come back there for sure! 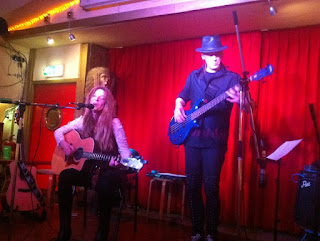 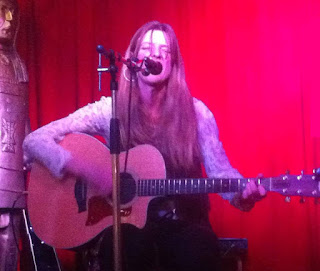 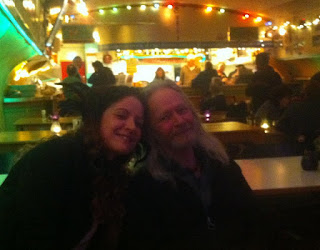 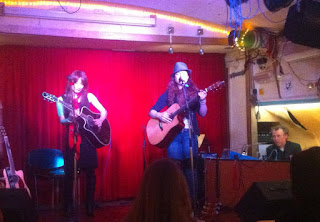 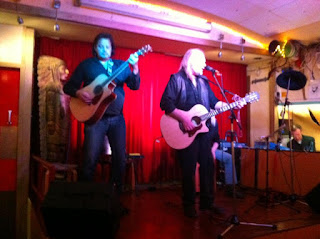 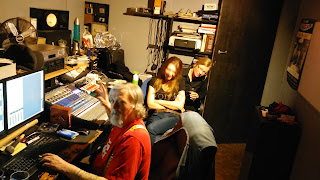 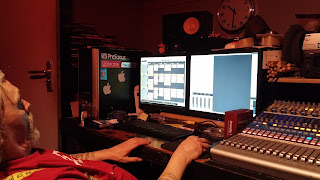 Last Friday-night I hardly didn't sleep so I was a little depressed when I woke up in the morning. I first thought I didn't have energy to make some recordings that night, and actually I wanted to cancel the whole thing,  but Mario was so excited and also Jannet wanted to come over so I decided to go and guess what,  I am so happy I didn't cancel!  I had a great night with my friends Mario and Jannet and Johann,the owner of the studio,  is such a nice, sweet and relaxing man! I really enjoyed being at Zozos!

I met Mario and Jannet at Central Station and we cycled to Studio Zozos, it was cold and rainy but at Zozos it was warm and cosy. Zozos is the studio of Johann Grunwald, a drummer and engineer. We asked him to record our music because he did last year when we played at Paleis Der Weemoed. I think he did a really good job that time,  so I asked him if he wanted to record us again and fortunallity he invited me to come over.

So last night we  played some of our music and recorded the music in just one track. Sometimes we had to start all over again because some trains passed by :))

We had a nice time together, very relaxing! We brought some red wine and played very concentrated our songs. The sound was very good while we were playing, in spite of the thundering trains...
So we played from 7 pm to 10 pm without taking a break and recorded 5 songs.
After that me and Jannet had fun by singing and playing with the turning chairs :)


Okay, I am singing competely out of tune on the turning chair, who cares anyway... but... I must say that I have learned already so much from Mathilde Santing her singing lessons. I have had only three lessons now and I had to think about her all the time when I was singing my song 'Those Words ' . I never sang that song so clear and in tune, I have no idea how I did it, but I was thinking about everything Mathilde told me to think about.

So, i came home a bit late but very satisfied and next week we will mix the recordings and i am gonna think about what kind of vid i will make. 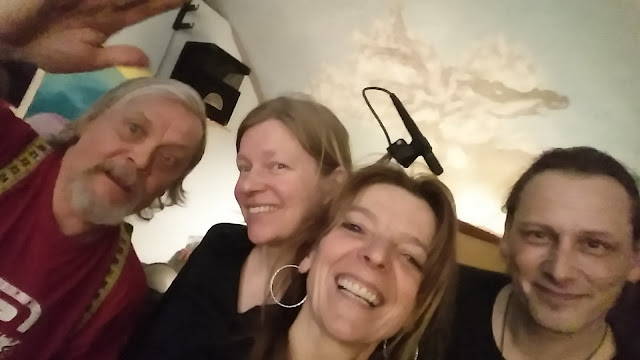