Café CC in Amsterdam, a pub for musicians 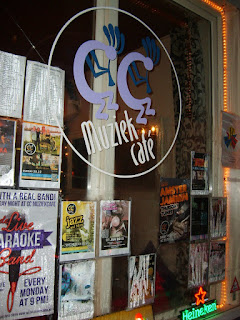 If you are working behind the bar it is good to realize that you are at that moment the face of the cafe. I used to work behind the bar myself, I think I did a good job to amuse people but the owners had different thoughts about me, so I got fired at least three times. But every time they asked me back because the costumers liked me, although they had to designate their drinks behind the bar...it just took me some time to learn all the names of the drinks by head so that I stopped giving the wrong drinks to people who didn’t order them. I must say, the face of café CC last night was most charming and I think he does a really good job by making people feel welcome at this pub. And I think he’s sometimes a bit like me because when I ordered a glass of water he put an empty beer glass on the bar. I think I’ve been staring at least 15 seconds at that empty glass while I was wondering what I should to do with an empty glass.. Then Frits discovered his mistake and with a “'Oh sorry, I am still a little sleepy from the New Year’s Celebration…”, and then he took the glass back and filled it with water. I thought this was a really funny incident. 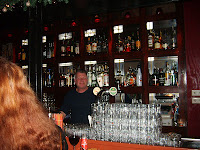 It was about a year ago that I had been at café CC for the first time (and last time) and I remember that there was also a bartender who nicely welcomed me with a cup of coffee and a chat. That I never came back was not because of the pub itself, but because of the location. For me it is a bit far to cycle. This is really a shame, because CC is a café where a lot of musicians are coming together. If I lived closer to it I think I would be there every week ! Anyway, Frits the bartender explained that all the stuff laid down and that we ourselves could choose amps. The cafe itself looked cozy, there were candles lit, there were cushions and Frits said that we just had to do if we were home. It was still early and the Great Feast of the New Year's Celebration was ended just 12 hours ago in this pub. While enjoying a cup of coffee I stared into the void. It looked like as if we were gonna play for tables and chairs. And for Frits of course. A few time ago I had asked the owner of the bar if I could come over and play the first of January because I knew that my Italian friend Gian Piero, who just arrived from Rome, there also would play And also I wanted to play because it is Christmas holidays so I don’t need work next day. Gian Piero is, as you've read, the author of a book about female Soviet pilots in World War II. He is now in Amsterdam to visit bookstores who might want to sell his book. He has also written some songs (in Italian) and he runs off some pubs where he sings his songs. I was happy when I saw Gian Piero and Craig came in and also a woman with her boyfriend. This woman had announced on Facebook that they would come and I really liked it she did. I did not know her personnaly, but I had seen her in the cafe Langereis a few weeks ago. So that made four human beings in the audience.(And Frits of course) Finally some more people showed up including a man who thought that he was going to play. But after consultation it was no problem that his turn would be around 11. The sound was really good in the cafe, and we played for an hour. No idea why I suddenly skipped a chorus and why I was in another song two measures too late with the bridge. Fortunately, bassist Mick was immediately ready and I could only see his eyes were narrowing a bit as he followed what I was doing. 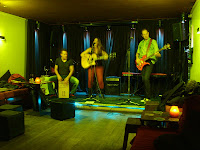 Finally we played the song “On the Corner” and during the third verse I felt totally drunk. It was so kicking and I thought to myself: “damn, that I can do this, am I really doing this ? This song is just a hit, man! Everybody should go out of their mind! Guess what! " (But there was just one to yawn and the other people had already begun with eating good food ...:) 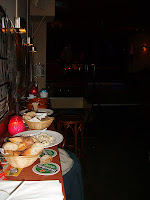 Well, what I am saying is this: I had a good time with Arjen and Mick and I think the people who were listening were happy and relaxed. Some of them asked me if we have a cd which they can buy, but we haven’t. I hope we will make some good recordings in the future. After the performance I was really hungry and somebody brought good food so I also started to eat and drink and having a good time with listening to the other musicians and talking with my friends. Café CC is a really nice café and I’m really sorry that I do not live near the café. I hope to come back one day. 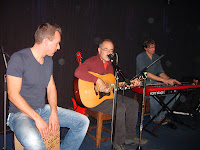 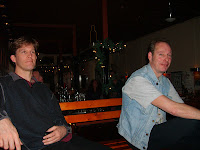 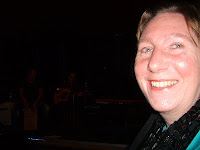 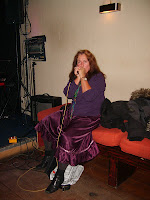 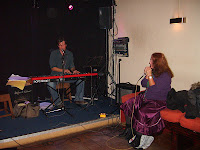 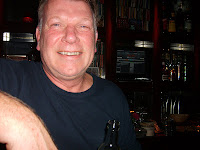