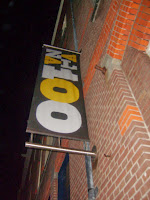 Last night I had a gig in Zaal 100  As a singer-songwriter you should definitely try to get a gig at this place on Monday- night.  Paul van Dijk is a nice guy you can contact to try to get a gig on the  stage at these' Feel Good ' nights ( Goeie Zin).
Zaal 100 is a place where many activities take place , and one of the rooms is a little restaurant. If you play there you will get food for free and a few dranks. Every Monday-night there are three songwriters acts. 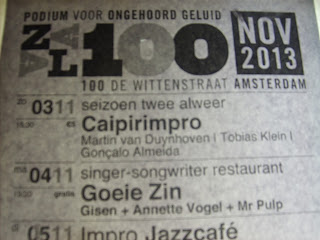 I decided to play there my easy listening songs and so this time I would not bam on my guitar . It was the first time in my songwriter career that I was going to play  a whole set on my own. I arrived a bit late but was well received by Paul and his girlfriend Lynn . She immediately friendly offered me a dinner. 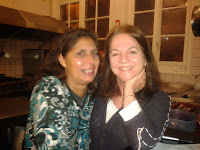 Gijs Hietkamp , a songwriter from The Hague opened the evening . I knew Gijs already,  he also had played at a SWANnight, an open mic which I organize every month .
Gijs has a beautiful voice and is very relaxed on stage . He also plays in his band Barefoot as frontman. I hoped I could play as relaxed as he was. When it was my turn he said to me: “Enjoy your gig !” And I thought: yes, that is just what’s it all about: making music and believe in what you are doing.
Danalyze came along because we had agreed that we would sing one song together.   Danielle has a beautiful voice and we recorded this song "By My Side" as an ASG-collab last year (with Craig). It was a long time since I had played this song , so it was a little bit tricky,but it went beyond expectations .
I have to say the evening went beyond expectations anyways. I was not very nervous , partly because I really love to play in Zaal 100  , I always experience the atmosphere  as very pleasant . During this gig I noticed that the audience listened to the lyrics and that reminded me that Sâdhya told me I should articulate the words better. So last night  I did my best to pronounce the words clear. 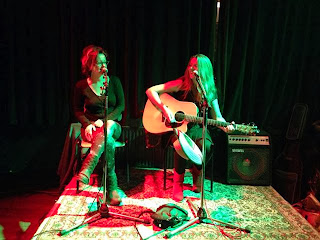 That brings me to the subject of giving and receiving criticism. I will never forget that I once saw on television how a pretty good singer-songwriter was ejected from a contest with the message: "  Your English pronunciation is very  bad, " and then she responded emotionally : " Why has never someone  told me that before ! "
It is sometimes difficult to receive but also to give feedback in a good way.  it should never be the intention to get someone down , every-one should expres their identity  in his own unique way.  But if you want on the stage to show and share your talent or whatever you want to tell the world ,  you may  be expected that you are open to feedback . You don’t have to agree with all of it, just take what you can take.. But how to give feedback to musicians ? Well here is the answer : in a friendly way . You indicate what you like and you tell the things someone could improve in your opinion. That's all. So please do and tell me what you think.
When I presented last week SWAN I sat next to someone who told me : " If you are going to announce the artists you better take the microphone and stand up straight. You present good, so don’t make yourself little. Stand straight. “The way he said this was very natural and felt sincerely. Then I feel like listening to his critics and do what he told me to do.
A few weeks ago I spoke to someone about my Hooker Song ( On the Corner ) . It could be that this song is perceived as rude. He told me this cautiously. Sometimes it’s better to write songs not in such a direct language, but more as a poem.  As a songwriter that's really something to think about. But…So many people, so many tastes and opinions. But if someone is involved in a positive way in what you do , it always feels good to get some feedback.
Now if you might want to say something about the way I play guitar, all your feedback is welcome.  On the guitar , I'm not so convenient , Many, many years ago I've had three months classic lessons. I taught myself to play guitar and now it's really time for guitar lessons. Recently, I have that and therefore there is a world opened up for me. The decision to take guitar lessons came when I played together on the Noorderparkfestival with Florian , a bassist . In advance we had rehearsed once and then  Florian improvised on my song ' the Raga ' ( ANNE ) I wish I could improvise on my guitar as I used to do on saxophone .
I love funk but also I like jazz and world music and I knew a guitarist who plays in a way I really like.   I got already three lessons and just started to exercise major, minor and seventh scales. I played a piece of my song the ' Raga ' and he came up with a few simple ideas that I 'm working on.
gitaarlick bij de RAGA

But let's go back to Zaal 100 . I am happy with this place and I feel happy about last night. I took  the step to play all by myself a whole set , only the last song Danielle sang with me. There were a lot of nice people and the band that played after me was very nice. This band is called Mr. Pulp, with front man Hielke Verkerk and they did a good job.  I think most of us were satisfied when we got back home. 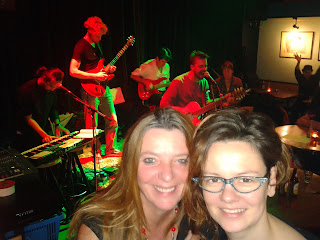 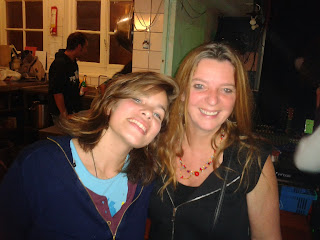