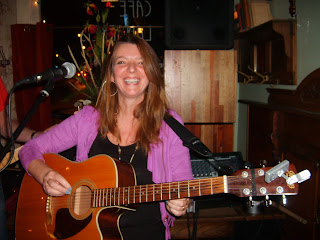 Last week I had a great gig at Café Langereis. You can find this café in the centre of Amsterdam, on the corner of the Rembrandtplein and the Amstel. Cindy Peress had invited some singersongwriters to come over and play their songs. I had never been there before and after half an hour cycling I arrived at 7 pm at a very busy Rembrandtplein. The café was even more overcrowded, there was hardly room to stand up. I couldn’t find any stage, so I first thought I was at the wrong place. I asked at the bar and they said I was at the right place and than, thank God, I saw Cindy moving somewhere between all these smiling people who already started asking me when I was going to play ( no, not because I am famous, just because they saw me with my guitar on my back trying to get a seat somewhere.) She asked me to wait for a while so she could move some tables to make room for the musicians. In the mean time Arjen, the cajunplayer, had arrived, and because of the fact that there was no room for us at the café , we decided to have some coffee at another place. That was a wrong decision because when we walked into the coffeeshop just in front of café Langereis, they told us we had to pay at least 15 euro’s to buy some weed and to get a table.We only needed some coffee and a place to sit down so we left the smoking coffeeshop and then I saw Mick somewhere in the dark.  So we returned to Langereis and finally we found some seats. 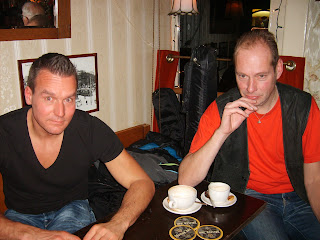 The first singersongwriter was a woman who played the piano. She did a   good job. She's called Sharon Goslar, good voice, good way to play the piano. (actually I think she was gonna play at SWAn one day but then she got ill, so maybe she'll come back another time)  Then Cindy played some of her songs and after her it was Hans Eckhardt his turn. He took a very nice singer with him and I really liked the way they played the last song.
Also I met Barbara Breedijk, she sang her songs in Dutch and some of them were really funny. Then it was Bomber Leo's turn, a nice young lady with a good steady voice. In the mean time it was around 9 pm and then it was our turn. I asked Barbara to make some pictures of me, and usually people take four or five pictures. But she took many, I almost started to feel a popstar by looking in the flashlight all the time; she took more than 50 pictures of me ! !
I think me, Mick and Arjen did a good job, allthough the we played the song Schizophrenia way too fast. It was only the second time we played with Arjen and I like what he is doing on his cajun. That little box sounds like a complete drumstel ( don't know the word in English, sorry again for my English) . The stage was really really small, so Mick sang his tunes right into my ear very loudly. This was a bit funny and everytime just before I knew he would start singing again I tried to shut my right ear.... The audience was very kind to us and the atmosphere was just allright.
After we were done it was Ron Goudie his turn. I always like what he is doing, I mean I like free jazz, punk and Ron Goudie. He will play at SWAN at the 9th of January, so I look forward to hear him play again.

There were some more acts, like a nice woman who played the piano. I don't know her name, but I do know she was the whole evening in café Langereis. I know this because at the beginning of the night she smiled at me in a very kind way. Finally it was Tony Chapman who started to play and sing, and he also played together with this woman with a nice voice ( sorry, don't know her name), you can see them on the pictures.
At the end of the night the owner of the café asked us to come back and play on a Sundaynight in café Langereis. I am very happy she invited us because I liked the atmosphere of that place. So we'll be there again in March. 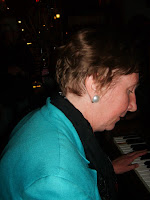