'Any questions ?' asked singersongwriter Captain Chaos last night at Jet Lounge. No sir, that was very clear to me. I liked what he was doing on his guitar. I could not understand the words of his lyrics but his English sounded like Russian. He's a Dutch guy though.
Maybe he was brought by the Dutch girl who lived many years in Berlin, she finished the show of another Amsterdam Songwriters Guild night at Jet Lounge with her nice performance. (Actually I dreamt about her: she had really long fingers and she could  play many beautiful chords on her guitar.) She called herself 'The singing barwoman'. 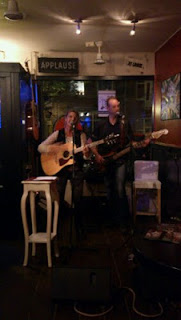 To be honest, I think Jet Lounge is a hard place to play, but that's only because of my nerves. At Tuesday night the place is full of excited and a bit tense musicians from all over the world. Last night the level was fairly high..
The night started with some guy who came in a bit late, so there was only one place left on the list: number one. ( You have to put your name on a list before 9 pm ) "Hell of a shit" and some other sounds came out of his mouth, then he put is name on the list and then he went to the table near the toilets to tune his guitar.
When he came back to my table which was just in front  next to the stage he threw six cd's on my table and then he left again to the back. A few minutes later he came back and started playing his songs. I liked his second song but I didn't hear his third because then I discovered a red wine costs a fucking four euro's ! That makes at least 0, 50 per sip. So the whole evening I took only one wine, which was fine with me.

After the first musician it was my turn. I played togehter with Mick and we did three songs. The first song was the song I wrote for the Addicted ( which I am; I am addicted to myself) and again I lost in the beginning the words of the lyrics. It made me very insecure, allthough I did bring the words with me. They laid down in front of me but I couldn't read them very well. 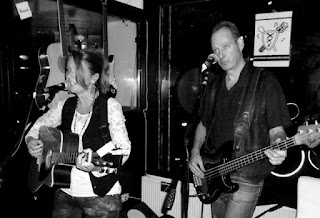 I was very nervous and I couldn't get over it. The audience was very quit and helpfull and nice, but only after somebody told me it was just allright I could relax a little bit. You know, whatever I pretend, I wanna give but I also need some people to tell me I'm doing fine.
Music can give something ( whatever it is) and this was proved by two guys from IJhorst, a town somewhere in Holland. They call themselves Jetfarm and when they played their first song I thought they were nice, but their second song started great and their third song made me happy. It really did. They were just doing great and when I first thought I was tumbling down from the mountain, they made me climb up again.
Something else happened what made me feel much better and this was the deep sigh of Ro Halfhide. He played some of his songs and he did this very well. After playing his songs with his old mate on percussion, he stood next to me at the bar and  I heard him heave a sigh of relief. I smiled, because I recognize how he felt and I said to him  he just gave everything what he had to give.  He agreed with me, and also his friend who came all the way from the East of Holland felt content about their performance.
You see, I think that's an important thing to realize. These guys got already much experiences by playing on the road but still we all share the same emotions as mucisians. I am not writing this down because I want to write down something nice about one of the founders of the ASG, but I write this down because it is the truth about performances. There is shit and there is glory and it all depends on your own subjective perception of yourself and the world which seems to appear in this perception.
So, however, at the beginning of the evening I felt kind of depressed but at the end I felt much better and with Danielle and Mick by my side I really enjoyed the music of other singersongwriters  that night.
http://soundcloud.com/jet-lounge/sets/amsterdam-songwriters-guild-9