Last Saturday I was really f*d up by some stupid ego-problems and so I needed to go out somewhere in the city. Okke, my friend and father of my lovely daughters pushed me to go out and drink, just to forget me, myself and my ego. Actually I already had drunk some red wine when I called Danielle, she's a very active singersongwriter in Amsterdam, and I asked her to come over to get anywhere what was possible that night.
Then she told me about this Amsterdam Songwriter Guild Party at Roger's house and that I was very welcome to enjoy this party. She called Luke Nyman so that I could get a ride to some place called Vijfhuizen ( never heard of it before ) and so I took my  bike to cycle as soon as possible to Luke's place ( I did this in 30 minutes and at the time I arrived I was completely sober again). He and Dirk-Jan (and girlfriend) were waiting for me (they are both singersongwriters ) and then we took this hired car. So we drove to Vijfhuizen and Roger Hammond and his wife welcomed us. There was a fire and food and dranks and I was so happy to be there, because it was nice, cosey and the singersongwriters who played that night were awesome.
Me, I played some songs too, and I was glad Craig also was at the party so that we could play together again ( We had a gig together at Barco's a few months ago), and also Danielle sang some songs with me.
The singersongwriters who played that night were: Danalyze ( Daniëlle), De Hoek ( only Mizza ), Roger Hammond, Dirk-Jan, Max Vanremmerden, Kathy Ziegler, Luke Nyman.

These black/white pictures are taken by Max Vanremmerden: 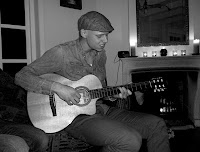 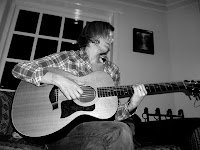 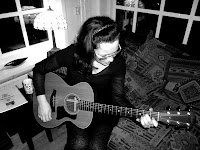